THE PRECEPT to pay for the Hedon component of council tax bills will rise for the new financial year (April 2016 – March 2017). The precept is the amount levied by Hedon Town Council on town council tax payers to provide very local services. 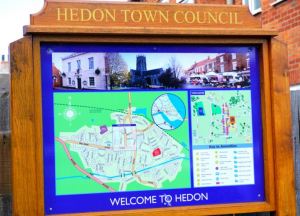 Included in the budget this year is a Hedon Town Council contribution towards extending car parking facilities at the old railway station yard. A £10,000 contribution from the town council will act as a catalyst in prompting a total investment of around £60,000 from the East Riding of Yorkshire Council to create new car parking bays. This will provide up to 15 spaces which will help ease pressure on town centre parking.

Also, in recognition of the success of last year’s HedFest – the Hedon Festival – the council has agreed to set aside up to £8,000 in the budget to contribute towards the #HedFest16 festival.

Part of the reason for the rise is blamed by the council on the loss of compensatory funding from the Government (via the East Riding of Yorkshire Council) which over the last three years has helped to keep precept levels static or low. The compensation funding awarded to Hedon last year was £8,755 and was nearly double that the year before. This year that compensation amounts to only £4,383.

Additionally, there has been a general rise in the cost of staffing the council, running costs and grounds and other maintenance costs (CCTV, litter bins, bus shelters, etc). As indicated above, the council has also increased the amount it intends to spend on projects and grants.

The Town Council’s website at www.hedon.gov.uk lists some of the responsibilities of the council and the services it provides through the precept. We reproduce that list here for residents’ information:

The Town Council’s responsibilities include the following :

In addition to the above, the town council supports projects that benefit local residents – for example, they helped underwrite HedFest – The Hedon Festival in 2015.

*Note:  Each local parish sets its precept expressed as the annual levy on a Band D property. There are eight council tax valuation bands A – H and the actual amount paid is dependent on which valuation band your property is allocated.