HEDON is the proud owner of what is considered to be the oldest civic mace in the country. 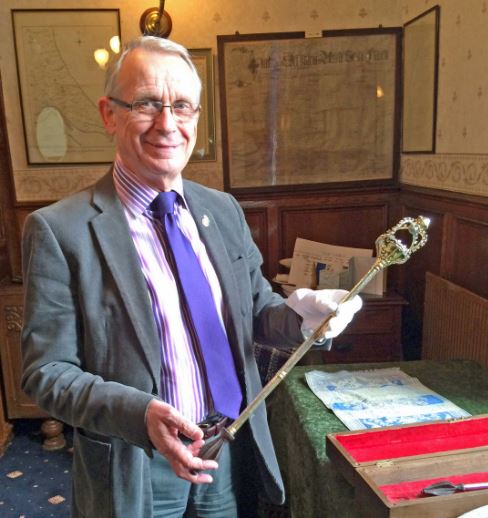 This ancient mace is not the one carried by the Sergeant of the Mace on ceremonial occasions like the Hedon Penny Throwing, that very ornamental mace known as The Great Mace is much younger having been presented to the borough in 1669 by Henry Guy to celebrate his election as Hedon MP.

Hedon’s ancient Mace is much older and is very rarely seen in public.

The Hedon Mace dates back to the 15th century and is linked to the reign of King Henry V who granted Hedon a charter conferring certain rights and privileges upon the place including powers of self-government. This charter of 1415 is linked to the acquisition of the ancient Mace but there is no evidence that Henry V actually visited Hedon.

However, new research currently being undertaken, suggests that Henry V may have visited Hedon and presented the Mace to the Hedon Mayor in person. Additionally, there is now a historic trail of research unravelling that brings together in a unique common bond the ancient places of Hedon and the City of London.

Councillor John Dennis, the current and 668th Mayor has placed a document as an item of information on the Hedon Town Council agenda tomorrow (28th May 2015) which reveals all.

In March 2015 the Town Hall hosted a visit from Dr Michael Hall the Curator of the Rothschild Collection at Exbury House in Hampshire. Dr Hall was researching an article for a historical arts magazine about London’s mysterious Crystal Sceptre which is one of the treasures in the vaults at the Mansion House, the historic home and workplace of the Lord Mayor of London. As part of his research Dr Hall wanted to inspect the Hedon Mace.

The Crystal Sceptre, crystal and gold set with pearls, forms part of the Mansion House’s ‘Civic Plate Collection’ which, as well as gold and silver plates, comprises rare pieces given as gifts or acquired by the Mayoralty and the City of London Corporation.

Little appears to have formerly been known about the Crystal Sceptre including its origins. Speculation was that the Sceptre was of Anglo-Saxon origin and perhaps over a thousand years old, whilst the ornamental head dates from the 15th century. Whatever its origins, there is an ancient tradition – a prescriptive right – that it is borne (carried) by the Lord Mayor of London at Coronations, and the last time it was seen by the citizens of London on public show was in 1953 at the Coronation of Queen Elizabeth II.

Another tradition at the Lord Mayor-making ceremony in London is that after the Lord Mayor elect makes their solemn declaration, continuity of succession is silently demonstrated by the outgoing Lord Mayor symbolically touching the Sceptre in its box and the incumbent doing the same (they do the same with the other symbols of office too; the Sword, the Seal and the City Purse). Councillor Dennis in his agenda document, quips that in London it’s ‘touching’ the artefacts: “That is their weird mayor-making tradition. In Hedon we chuck pennies to the kids!”

Dr Hall is also writing a book on the Lord Mayor of London’s Civic Plate collection, and from implication it seems that in the book and the article he will suggest that the ‘mysterious’ Crystal Sceptre is in fact another of the maces presented by Henry V.

For Hedon, the research by Dr Hall suggests that (quoting from Cllr. Dennis’ document)

“…in 1421 Henry V went on a process to the North of England partly to celebrate the feast of Translation of St. John of Beverley, one of three Saints he revered and his trip took him to York, to Beverley for the Saint’s day, and then to Lincoln, meaning therefore, and I quote Dr Hall ‘He almost certainly crossed the Humber from Hedon on or about 12th April 1421, when he would have been able to present the Mace to Hedon’s Mayor in person – a Mace, who knows, made from a weapon used at Agincourt.”

So quite possibly Henry V visited Hedon and presented the Mayor – Cllr. Dennis suggests it could have been either of his predecessors Mayor William de Merflete or Mayor Robert Wyntryngham – with the Mace.

Of course, as Cllr. Dennis states, there is no categorical proof that Henry V visited Hedon to present the Mace – or that it was forged from an artefact from Agincourt, but to have it suggested to us by such an eminent historian during the course of his research is certainly significant!

The observations on all this to this are twofold:

Of course if all this is accepted, it would beg a question; which of the two maces is the oldest? …And we just might not like the answer!