COUNCILLOR Neil Black has been nominated as the Mayor for the civic year commencing 28th May 2015. The Deputy Mayor nominated is Councillor Di Storr.

If the Mayor Making ceremony takes place as expected on the 28th May, Councillor Black will become the 669th Hedon Mayor.

King Edward III granted a Charter of Incorporation in 1348 which gave Hedon the rights to be a self-governing borough and to elect a Mayor. The Mayor Making ceremony has become a traditional and formal part of Hedon Town Council’s Annual General Meeting.

So what happens at the Mayor Making?

Following prayers, the new Chairman will be formally elected by other Hedon Town councillors and by being elected to that post will also become Hedon Town Mayor. The new Mayor will then retire to the Town Hall Parlour for the official robing. 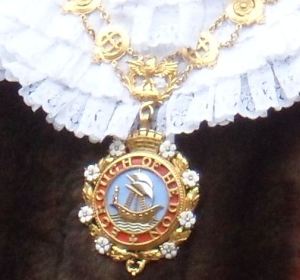 The new Mayor donned in the official robes returns to the Council Chamber and will be invested with his Chain of Office latterly by the Sergeant of the Mace but on this occasion most likely by the retiring Mayor. The new Mayor will appoint his new Mayoress who will be presented with her Chain of Office.

The Deputy Mayor elected and appointed will then be invested with their Chain of Office.

The new Mayor and councillors will pay tribute to the retiring Mayor remarking upon their role in representing the town, acting as its ambassador, raising charitable monies and highlighting good causes.

With the formal business done, the first public act of the new Mayor is to lead other councillors, civic leaders and guests to take part in the Hedon Penny Throwing Ceremony outside the Town Hall where children and their parents are waiting to greet the new Mayor – and of course the mayoral pennies which are thrown to the ground to be collected by the children.

Note children should bring their parents to gather outside Hedon Town Hall for 6:45pm on Thursday 28th May 2015.

The new Mayor will hold office until the Mayor Making in 2016.