IS the Labour Party about to pull off a major coup in local politics and unseat the Conservatives defending their South West Holderness seats on the East Riding Council? In the first of our reviews of the four political campaigns being waged to win your vote in the South West Holderness Ward election to be held on Thursday 7th May 2015, we look at the Labour Party campaign. 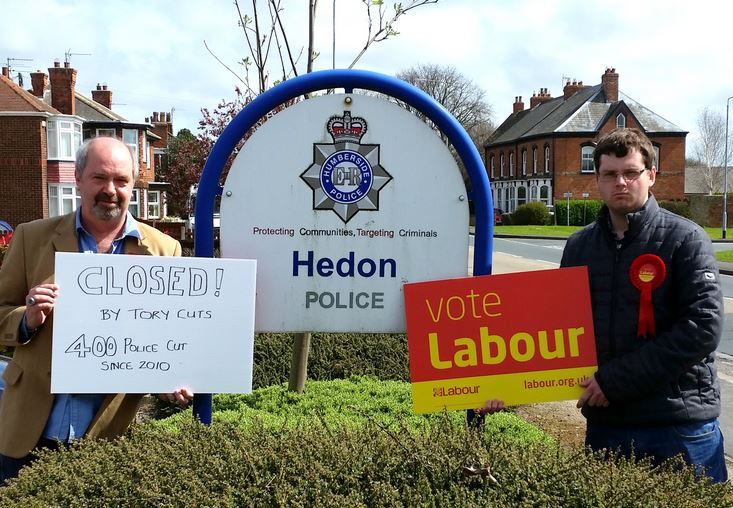 The Labour Campaign has been waged since October 2014

The Labour Party in the area started their campaign early in October 2014 and its three candidates – who include long-standing Hedon Town Councillor Neil Black as well as previous Labour candidates Brian Stockdale and Steve Gallant – believe that they can unseat the sitting Conservative councillors John Dennis and Mike Bryan.

On paper things do look positive for the Labour campaign. Steve Gallant said that the party’s canvassing revealed: “We have found virtually no Lib Dems voters. Plenty have said they voted Lib Dem last time, but didn’t want a Tory Government so they are going to vote Labour now.

“It appears to be a close two-party race between us and the Tories here, with far fewer UKIP than I feared, and the others – nowhere.”

We explore some of the issues facing the Labour Campaign below:

No Lib Dem candidates: There has been a traditional Lib Dem vote in South West Holderness with the highest placed candidate in 2007 receiving 1,963 votes. The Liberal Democrat vote in 2011 collapsed after that party was seemingly punished by voters for its role in taking part in the coalition Government. The highest placed Lib Dem candidate and sitting county councillor at the time came 7th in the poll with only 656 votes. This deterioration of the Lib Dems has continued reflected in the fact that there are no Lib Dem candidates this time round. Those votes will be cast for other candidates.

In 2011, Labour came 4th, 5th and 6th in South West Holderness, with Brian Stockdale being just 399 votes away from being elected.

Independent vote: The retirement of veteran Independent councillor Ann Suggit will undoubtedly affect the results this time round. Ann had a significant personal vote as well as capturing those who did not want to align themselves with party politics. Independent Sarah Rommell will hope to maintain the banner of independence in the ward and keep some of those votes which accounted for 1,645 votes in 2007 and 1,529 in 2011, but she is an unknown factor to most of the South West Holderness electorate although her anticipated stances on defending the NHS and opposing fracking are likely to win over more Labour voters rather than Conservative voters.

Austerity: As has been demonstrated through the Election TV debates, the issue of austerity and its perceived inevitability put forward by most of the parties has been challenged. While nationally Labour has said it will maintain a programme of spending cuts while cutting the national deficit every year, their opposition to the bedroom tax, zero contract hours and commitment to improve wages, for example, will still quite likely attract the anti-austerity vote.

Local issues: The Labour Party in South West Holderness has put the fight for upgrades to roads and drainage near the top of its list of pledges. It seeks more affordable homes for the thousands on waiting lists whilst opposing over development of our towns and villages. They have also put upgrading broadband on the election agenda – a discussion which has featured prominently on the Hedon Blog.

Policing and the changes to Humberside Police have been highlighted by the Labour Party who on Sunday (19th April) put up a “Closed” sign at Hedon Police Station claiming it was now closed most of the time with 400 police officers having been lost from the Humberside force in the last 5 years. Nationally, Labour they say will scrap Police Commissioners and use money to recruit 10,000 more officers.

UKIP: The UK Independence Party is an unknown factor in South West Holderness. Its candidate in the ward – if national pundits are to believed – will take votes from both Labour and Conservative.

Local Conservative Candidates: The local sitting councillors of Mike Bryan and John Dennis will be both a plus and a minus for local Labour. The fact they are ‘Tories’ associated with the coalition Government and its policies will work in Labour’s favour they believe – especially considering that on polling day Thursday 7th May many will be voting with national issues firmly on their mind.

On the negative side from a Labour perspective, both the Conservative candidates have been highly visible as councillors during their 4 years in office and have built a solid base of both personal and political support. With the added threat of Dr Sue Steel joining the right-wing cause, the Conservatives will be hard to unseat – but that is just the kind of coup that Labour hopes to achieve!

There are eight candidates standing in the election for the three seats from South West Holderness Ward on East Riding of Yorkshire Council.