Every candidate standing for the East Riding of Yorkshire Council is offered space (up to 500 words) to outline their manifesto, pledges, opinions and stance. Candidates should send statements and a photo to hedonblog@gmx.com (changes and updates to the published statements can be made via the same e-mail – Ray Duffill, Editor).

Terry West is the UKIP candidate for South West Holderness in the East Riding of Yorkshire Council Election 2015. 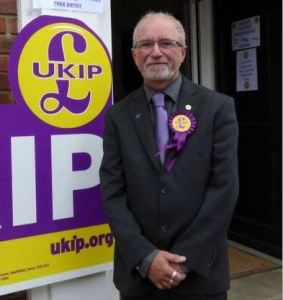 Terry West is the UKIP councillor on Hedon Town Council elected in February 2014 and the party candidate for South West Holderness. He has lived in Hedon for over 30 years and runs a construction and design building company.

“I am keen to protect the current green belt areas within Holderness. To say ‘No’ to any more subsidised wind farms which only increase the real cost of energy to all families in Britain. And new dwellings built should not increase the risk of flooding and have a positive input to the Nation’s energy supplies.

“As a councillor in Hedon I have attempted to resolve some of the parking issues in the town, having recently identified surplus land at the old railway station where new car parking spaces can be constructed.

“I joined the UK Independence Party, after years of complaining about the three main political parties, which to me had made no real difference to improve the lives and aspirations of the hard working people of Britain.

“I believe that now is the time for real change in how our Country is run, not for any Political Party but for the good of all the people who live and work in the United Kingdom. We need to give back the fundamental rights to control our own destiny, bringing back our core principles of law and freedom and have complete control over our borders and all that it entails. To put the future of our Country back into those who we directly elect into the British Government.

“Through-out our Country’s history we have fought to maintain and enhance our rights to self-govern, as years pass we control less and less of our laws and regulations that have such an impact our daily lives. UKIP will take back those fundamental rights, which has been given to easily away and forge a new prosperous path for Britain in the World. This is at the heart of the UK Independence Party, which throughout our Country’s history we have literally fought for to maintain and enhance, so precious and without UKIP so easily lost”.

More from this candidate at www.ukipbh.org